The Helpline by Uday Mane: Impressions 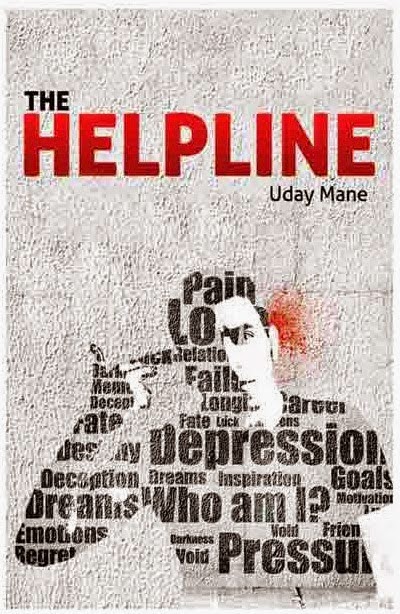 'The Helpline' will always be among the most special of the books I've reviewed for two reasons. One, because the author, Uday Mane, who is a good friend, sent me the book at the manuscript stage for my opinion and has very kindly put my name on the acknowledgments page; two, because it is a striking story. In fact, it is one of the most memorable pieces of fiction I've read in a long time. And no, I'm not saying this because Uday is a friend. I have a lot of qualms about this book, but we'll come back to that later. Let me talk about why this story is so beautiful, first.

'The Helpline' opens with protagonist Samir Masand in a bad state, battling depression and suicidal thoughts. He is a 20-year-old college dropout, who has shut the world out because of a personal tragedy and the ensuing guilt. Despite the best efforts of his friend, Neha, he refuses to be drawn out of his shell. He is seemingly spiraling out of control, until one day, he decides to call a suicide helpline. On the other side of the phone is Rachel, who will change the course of his life. It is through Samir's telling  of his story to Rachel that his life unfolds before us. We hear about Ria, Samir's love interest, their courtship, and an unexpected climax. But the best part is the climax after the climax! You want to read this book for the part where Rachel's identity is revealed!!!

Mane builds up the plot beautifully, with a not too linear narrative. We come back to the protagonist's present sometimes, but the story is mainly about his past. His characters are well-rounded with attention to detail. Apart from the main characters, the minor ones like Samir's grandpa (Nana), Ria's brother Siddharth – a special child with Down's Syndrome, Parker Chacha, the cafe owner, also become endearing. Two more things that struck me as special in the story are the prologue, which is a dream sequence, and an episode where Samir and Ria go to a lake. The prologue is powerful in its 'subconscious' manner of writing, while the lake episode is extraordinarily romantic. The two climaxes, of course, take the cake.

Mane keeps his narrative fairly fast-paced, but there are parts where it tends to slow down. Mane is a good story-teller, but he has to evolve a lot as a writer. My biggest grouse is against his editor, who seems to have done a lousy job. The plot could have been made tighter, and goodness, the shoddy proofing!  There are too many instances of grammatical ineptitude and not to mention the spelling errors. I hope there will be corrections if a second edition comes out. I also was unhappy with the epilogue, which seemed forced and unnecessary. I don't remember reading it in the manuscript and liking the ending better.

The writer's grip on the language is not his strongest point, but he has full marks for the narrative art. 'The Helpline' is only Mane's first book, and I know it is the beginning of a long journey for him. I've known him for close to four years now and I have enthusiastically followed the short stories on his blog. In fact, he has slyly incorporated two of his best in the novel. He is a gifted story-teller and I know he will only get better with his subsequent works. 'The Helpline' is a wonderful debut, and certainly one of my favourites!