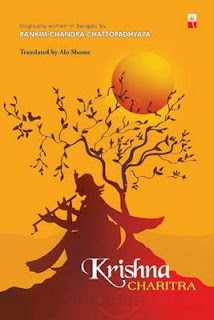 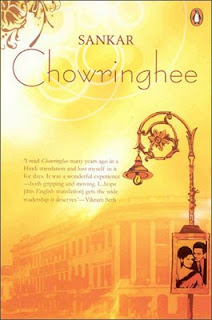 Pregnancy does strange things to you. And the bloating body is the least in consideration in this context. With such a huge responsibility lying within you, the need for protection, for safety becomes prime. Me turning to 'religious' and 'regional' books is one example. Now, whether I sought them out because I'm pregnant, or they just happened to be in that place in that time...we'll never know. But, why let go the opportunity of hiding behind this once-in-a-lifetime experience to explain everything unusual? So, call it pregnancy we will, and perform a critical (C) - section on the last two last books I've read.
1) Krishna Charitra - Bankim Chandra Chattopadhyaya - translated by Alo Shome
The first of the two Bengali translated into English books that I've recently read. My need to buy this book was prompted by it being a book about my favourite Lord and it being a book by a famous Bengali author. As the day of my baby's birth and its impending baptism come close, I frantically cling to the strings of my ethnicity for fear of being a 'minority' in my own home.
So, I started with the book, and disappointment greeted me right in the first pages, where the translator, in her footnote, mentions leaving out biggish bits of academic arguments made by the original writer. Hah! Some cheek to assume that a reader of translation wouldn't be interested in those. Anyway, since the stories being told were about my Lord, I flipped through. The one interpretation of common lore that will stay with me forever is that of the Putana demoness sent by Kamsa to kill baby Krishna. Since the author tries to analyse everything in the context of plausability, his explanation for this incident is that, at the time when krishna was a baby, an epidemic of sorts had struck Vrindavan. The disease rendered babies so weak, they would be unable to suckle and eventually die of malnutrition. Krishna, being a fairly superior human baby was strong and could manage to suckle hard and therefore stay alive. The explanation is perfect. Putana was a metaphor for a disease -- as it would be for any unexplained phenomena in the olden days -- and was conquered by Krishna. Alas, all other babies born around the same time fell prey to 'Kamsa's wrath'.
From one lore to another, the author takes one on a demystifying journey, but fails to impress, since the interpretations become very subjective: exactly what the author accuses the various writers of Mahabharata of being. Discussing the similarities and discrepancies is the actions of Krishna-the man, what the reader is left with is some very dry commentary. Whether the dryness is the author's fault or the translator's, I shall never know. But, comparing all of the author's said glory in bengali literature to what my experience was, I will always blame my inability to read the original text and the translator for perhaps not doing justice to me.

2) Chowringhee - Sankar - translated by Arunava Sinha
In continuing the same set of motivations, another Bengali classic translation was called to the altar of my criticism for an unworthy sacrifice. Growing up, I'd heard the praise the original deserves from my mother - an avid reader of Bengali literature. And whenever I chance upon classics such as this, translated in English in one bookshop or another, I buy it without a second thought. It feels like a chance to reclaim part of my mother tongue heritage. And after one disappointing translation, I think, I'd pinned too many hopes on this one to salvage my opinion of translations.
Sadly though, Arunava Sinha didn't show any more promise than Alo Shome. Not in a first few pages, the next few and neither the few after that. There were glimpses of 'root recognition' once in a while, when the author speaks about familiar landmarks in the place of my birth, but the narrative is as slow as the period in which the novel is set. Dragging my feet through its pages, I come by the many 'characters' across the reception desk through the writer-protagonist. Most of the situations that these people are described in, are too far-fetched to be true, or so it seems in comparison to the real writing of the modern authors I'm used to. I didn't find anything about the book agreeable - neither the style, the language, the plot, the characters...nothing at all. At least not till the last three pages. Unlike the pace of the whole novel, the plot's crescendo is suddenly peaked, and before you know what's happening, it's over. All the major characters just suddenly decide to leave or die or get kicked out from the glittering existence of the Shahajahan hotel and you're left wondering again, how much of the book was lost in translation.
Posted by Urmi Chanda Vaz at 3:47 PM 1 comments