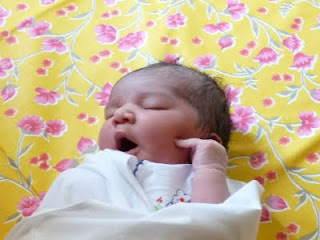 Painkillers and nature have given me enough respite by today to be able to sit up and type away at my laptop.
Our son (what an unbelievable expression!) Jishnu, was born two days ago on the 22nd of September, 2009 via a caesarean section. Before my days and nights are consumed by this adorable little creature sleeping on the cot right now, I want to capture what are perhaps the most poignant memories of my life, in words.

The day before (Sept 21, 2009)
Mum and Babu had reached earlier that morning loaded with boxes full of yummy fish. Despite all my fears of a major surgery the next day, I ate a hearty lunch after my check-up at Gupte Hospital. Apart from the greed of it, a morbid fear of that being my last good meal egged me on. I laughed, joked, talked through the day and generally managed to hide my fears. Each time my baby kicked or moved, I touched my tummy trying to file away the memory of that sensation knowing that it was one of my last ones. Each time I felt afraid of what was in store for the next day, I took comfort in the thought that it would be the beginning of the return to my ‘earlier self’. As much as I wanted time to stop and save me from having to face my biggest fears, waiting to go to the hospital seemed like forever.
Finally, the time arrived and we headed to the hospital to get me admitted. Loaded with the ‘hospital bag’ that had been packed and kept ready for weeks, we proceeded. My Radha-Krishna picture also, obviously, went with us.
Chaos greeted us at the hospital. After asking a million questions to the dumbest admin woman in the world at the reception desk, we gathered that there were no rooms at the hospital! That day, there had apparently been an unprecedented number of emergency cases and therefore all rooms had been occupied. After they conducted the NST (Non-Stress Test – an ECG of sorts for the baby), we were offered two choices. I could either go home and come back at 6 the following morning, or put up in one of the rooms at their old hospital which was a few blocks away. Viren and I didn’t want so many weeks’ worth of mental preparation to go waste and decided to put up at the old hospital. Sleep came easy to our weary minds, breathless with the anticipation of a brand new life at the other side of the night.

D-day (Sept 22, 2009)
‘Mavshi’ (one of the ayahs at the hospital) had told me she’d come to get me ready at 5 in the morning and there she was precisely by the clock armed with razors and an enema kit. ‘Great!’ I thought, ‘here begins that infamous string of humiliations’. Gritting my teeth, trying to be as objective as I could be, I let Mavshi take over as she went over the rituals with the most convincing poker face I’d ever seen. Feeling like the lamb being readied for the sacrifice, I sat there ready for the call from the hospital. They summoned me at around 7.30 am. I called my parents, who were at home, and went into the pre-op room. After I got into the hospital gown, I sat on the examination table clutching a small bronze Krishna statue in one hand, and Viren’s hand in another. It was only a matter of some minutes now. Soon, Vir was sent out and I was taken into the operation theatre. Lying there on that cold steel table, looking up at the arc lights, I awaited my turn for what seemed like forever even as docs and nurses flitted across the room to the two other OTs on either side of my OT.
At about 8.20 am, the nurses started cleaning me up with their lotions and potions and seemed to sweep me clean of whatever little modesty I was left with. I lay there, mostly bare, trying to smile back at docs offering polite introductions from behind masks. How I wished the masks would cover their eyes too. Months of going specifically to a female gynecologist seemed like a joke, when the roomed was swarmed by an all-male bastion of specialists for my surgery. The anaesthesiologist, the surgeon, the paediatrician, all of them – men!
I was given the spinal anaesthesia at about 8.30 am and within minutes the lower half of my body was as good as gone. The docs put a sheet to block my view of their ‘work area’ and after about 10-15 minutes of what seemed like gentle poking and prodding, they pulled out my baby and announced that it was a boy. It was 8.46 am on a Tuesday, the 22nd of September, 2009, when I became a mom.

Out and about
I was stitched up and wheeled out after being left alone in the OT for a long time. The availability of rooms at the hospital was still a problem. So, I waited there on the table thanking god that everything had gone well, pining for Viren, trying to move my toes and being pleased about my ‘empty’ tummy.
Once out of the OT, I was greeted by relieved smiles from my husband, my parents and my parents-in-law. Baby had been shown around and the healthy, 3-kg baby boy seemed to generally have met everyone’s expectations. We all proceeded to room no 207, a super deluxe type.
The last set of ‘humiliations’ came to pass through the rest of the day in the guise of bedpans, gigantic sanitary pads, adult diapers, nipple pinches, tummy presses and inspections down under. But I braved it all (not that I had a choice) and having some visitors after a spate of SMSes did help my cause. After eight bottles of IV, that memorable day drew to an end. Exhausted, Viren and I retired to our first night of sleep or sleeplessness, as parents.

Day 2
Though sleep was punctuated by a couple of night-time feeds and clean ups, I woke up rejoicing in the fact that IT was all over - I was pregnant no more, the operation was successfully over, the baby was fine and I was on my way back to being ‘normal’ again. I took my first painful steps to the loo, but it was definitely better than having that disgusting pan to pee in. I was then sponged by one of the mavshis (sigh, modesty is kind of tough to maintain in a hospital), but I sought happiness in getting out of the ‘bare-in-the-back’ hospital gown.
Parents, doctors, nurses, visitors did their rounds through the day, while baby had his first bath and his first injection. Among his other firsts was me trying to feed him. I also happened to cry quite an eyeful when faced with the apparently common problem of a slightly delayed lactation. I was tired of not being ‘perfect’ for the last nine months. Some more imperfection was definitely not appetising.
Day 3
I took a short walk in the hospital corridor today with my son in my arms and felt rather proud of it! Tired and kicked at the same time with my feat, I sat down to document these days - days that will probably become a blur by the time we celebrate Jishnu’s first birthday. Tomorrow I’ll be discharged from the hospital and we’ll take our son home to begin a brand new episode of our lives.
Posted by Urmi Chanda Vaz at 7:36 PM 7 comments