Land of the Seven Rivers by Sanjeev Sanyal: Impressions 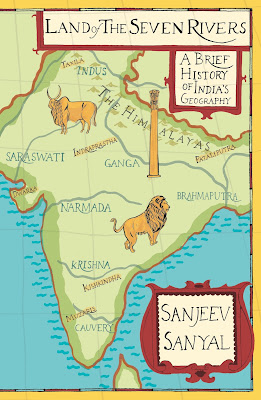 I've been a bad girl as far as reading goes, and worse still, about reviewing books. A mad phase at work leaves me with precious little mental energy at the end of the day and by TBR pile looks at me accusingly. However, I not only made time for Sanjeev Sanyal's 'Land of The Seven Rivers' , but also found it quite unputdownable. It is unputdownable not in the manner of thrillers but by way of presenting the reader with many 'Oh!' moments.

'Land of The Seven Rivers - A Brief History of India's Geography' is a delightfully informative read, and Sanyal even manages to pepper it with wit! I was very intrigued by the title; finally someone was promising to tell me something about India's history that had nothing to do with the same old Marathas and the same old Gandhis. Geography was also not a subject that interested me much in school. Who wants to read endlessly about kharif and raabi crops, right? But here was a title that claimed to be none of the two, yet both.

And Sanyal holds true his promise. With extensive research, a lot of which is based on his personal travels, Sanyal traces the origins and evolution of the subcontinent. The book is divided into eight chapters that chart the course of India, right from the pre-historic times down to the present-day. The first chapter, ‘Of Genetics and Tectonics’ deals with the formation of the natural geographical boundaries, using the continental drift theory and examines the latest notions about the nation’s gene pool. Citing modern research, Sanyal too finds the Aryan Invasion theory redundant and concludes that the Indian people are a truly eclectic mix from across the world, then as now.

The second chapter, ‘People of the Lost River’, deals with two of the most intriguing elements of India’s past – the Harappan Civilization and the River Saraswati. Sanyal does a quick recce of the vast body of research on the Harappan, or what is now called the Indus Valley Civilization. The author is in agreement with the modern researchers who propose that the Vedic and the Indus Valley Civilization were the same. Disproving the Aryan Invasion theory again, Sanyal points out that India’s earliest cities withered away due to the drying up of the great river Saraswati. The chapter also talks about the Bharata tribe, from whom India derives its name.

The third chapter, ‘The Age of the Lions’ discusses a period that roughly coincides with the Late Iron Age. It was the milieu of some of India’s most important personas including Gautama Buddha, Chanakya and Chadragupta Maurya. It was also the time of Alexander’s invasion, and the building of the first highways. Sanyal also discusses the introduction of the lion in the country, supporting it with scriptural and historical evidence, and the induction of the animal as a symbol of royal power.

‘The Age of Merchants’, the fourth chapter, talks especially about the ports of southern India that flourished during the Chola dynasty. It emphasises the importance of port towns in serving as the melting pot for cultures and commerce. Sanyal also points out how the once flourishing maritime trade in India diminished with the onset of caste restrictions on ‘crossing the waters’. Through the fifth chapter, ‘From Sindbad to Zheng He’, Sanyal continues to talk about traders that made their way into India and eventually set up communities here, slowly giving India its multicultural hue. There are many interesting tidbits about evolving maritime technology too in these sections.

In the sixth and seventh chapters, ‘The Mapping of India’ and ‘Trigonometry and Steam’, the author sheds light on the aspects of cartography, not just in India but the increasingly dominating European nations. Europe’s advancement in map-making, mathematics and technology paved their path to eventual world domination, while the Indian dynasties like the Muhgals and Marathas crumbled under the weight of the old world.

By the time we get to the last chapter, ‘The Contours of Modern India’, the British have obviously established colonial rule in the nation. We read about Calcutta’s emergence and disintegration as the seat of power. We read about the making of Delhi all over again by the British, as by a long line of Indian rulers. The chapter also obviously speaks about the partition, the making of Bangladesh and the strained relationships we share with Pakistan and China.

The book is so full of amazing facts that I couldn’t help but write such a long review. It is a must read for anyone interested in India’s history, geography and even mythology! Sanyal’s authoritative voice and extensive research make it a great read and it may as well serve as a handbook for any student of ‘India’. I most certainly recommend it.