Who wrote the Bhagvad Gita? by Meghnad Desai 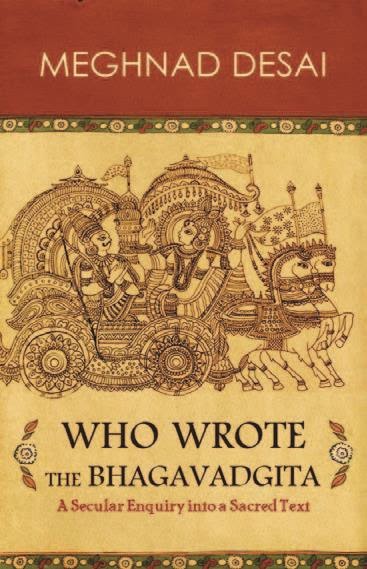 So the ICHR (Indian Council of Historical Research) is trying to 'date' the Mahabharata on one hand, and we have Baron Meghnad Desai asking who wrote the Bhagvad Gita on the other. The timing of this book appearing in the market could not have been more right! Oh, there should be a ticket price for watching what happens after one has thrown a copy of this book in ICHR's compound. *wicked grin*

Jokes apart, 'Who Wrote the Bhagvad Gita?: A Secular Inquiry into a Sacred Text' is a book to be taken seriously. The ICHR may be the butt of many jokes in the intellectual circles right now, but it is no secret that a chunk of our nation thinks the way they do. Most of us have been taught to believe – and we like to believe – that the Bhagvad Gita is a divine composition. And in that light, this book is not for the 'faint­hearted'. Not that Desai makes light of the sacred position the Gita holds in our society; but academic inquiry is often in direct conflict with faith. Desai, like many Indological researchers before him, poses questions about the coherence and composition style of the text; which, to most laypersons might sound sacrilegious.

But Desai presupposes the Gita to be the work of a human author or authors, and then puts forth his theories. To the uninitiated, Meghnad Desai is a renowned British Indian economist, politician and a Padma Bhushan awardee. Although his work is extensively in the field of economics, he is highly respected as an academician in general. 'Who Wrote...' is his first book in the field of Indology, but his methodology and sharp insights as a pro researcher are evident. Desai draws his theories from many critical editions, translations and commentaries of the Gita. He cites the opinions of some of India's greatest thought leaders, including, Tilak, Gandhi, Vivekanada and Sri Aurobindo.

However, his largest influencers are D D Kosambi and Dr. G S Khair – two of the most vocal (and respected) critics in this sphere. There are a number of points Desai makes to support this theory of Gita's human authorship, but the primary among them are:
a. A discernible difference in literary styles among certain sections of the Gita
b. Internal ideological differences in those corresponding sections

Then there are cases of chronological problems, verse repetitions interpolations, caste and gender discrimination, and the induction of Buddhist ideals, the details of which a reader should get from the book. Desai deals with every aspect in a categorical manner, citing the verses he finds ‘objectionable’ and laying down his reasons for the same.

But my greatest takeaway from the book was Desai's assessment of the Gita's social worth in the Hindu society. He brings to notice some very recent – in the grand historical perspective – political and cultural events that brought the Gita into prominence. Before Tilak and Gandhi wrote and spoke about it extensively, the Gita doesn't seem to have had much sway in the nation. Today, we repose unquestioning faith in the text and hold it in the highest esteem. In this context, Desai asks us a very pertinent question: Does the Gita's 'slippery opportunism' morally allow us Indians to be corrupt and complacent?

Read it, think about it. I have been thinking too.
Posted by Urmi Chanda Vaz at 11:31 AM 1 comments 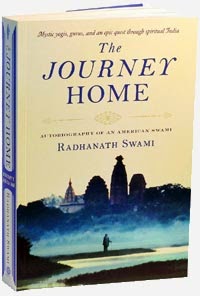 I recently resigned from work, having decided to take a two-year sabbatical to study. I hope to change the course of my career and consequently my life, choosing my passion over a safe, set career. Coming upon the story of Radhanath Swami’s spiritual journey at a time like this was probably a sign. The account of a young American boy’s internal conflicts, his thirst for a higher purpose and his subsequent finding of a spiritual home resounded well with my state. That said, I was disappointed by the literary quality (or the lack thereof) of the book. When I chose this book to read and review, I was expecting something like ‘Autobiography  of  a Yogi’. But I realized soon that this book was nothing like that spiritual classic. (I really want to question that ‘International bestseller’ sticker on the cover of this edition.)

But that’s not to undermine the things I took away from ‘The Journey Home’. Radhanath Swami’s journey is extraordinary to say the least, and mere mortals like us can only look on with awe and reverence.  Born Richard ‘Monk’ Slavin, Radhanath Swami’s childhood was spent surrounded by noble Jewish parents in an American suburb. In his youth, he discovered the counterculture of the hippies and did everything that the flower children did. At the age of 19, he set out to backpack across Europe with his friends to experience the adventure called life. But the call of the divine took him further on from Europe onward to India on a road trip. Travelling alone and often penniless, Monk experienced a number of thrilling, sometimes life-threatening, episodes as he crossed Turkey, Afghanistan, Pakistan, etc. en route.

Once in India, the author roamed the country, especially through the Himalayas and other holy places. He met the most accomplished Yogis and lamas, got a taste of the different spiritual schools and teachers, and spent months as an ascetic, observing strict austerities. He lived in caves, under trees, by river banks and begged for food, living like a true sadhu. But his heart would not find refuge in one place or philosophy, until he landed in Vrindavan. There, he discovered Krishna, the path of Bhakti Yoga, and ultimately his guru in Srila Prabhupada (the famed founder of ISKCON).

While Radhanath Swami’s journey is awe-inspiring, the book often gets boring to read. Whatever else he may be, Radhanath Swami is not a writer. His lack of skill makes even the most fantastic instances sound ordinary, and the spiritual insights he offers – peppered in italics through the book – often sound juvenile. It may be that these ‘insights’ were that of a 20-year-old American boy and hence are the way they are, or it is purely poor writing. I can imagine the editors of this book pussyfooting around the author because of his spiritual stature. Also the testimonials by famous people seem to have been made more because they couldn't turn down a holy man rather than because of the quality of the book. But as a reader and a critic, I find it hard to ignore the subpar literary production. So, unless you are particularly interested in the man and his mission, you can give this book a miss.