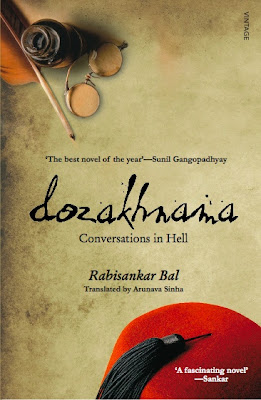 Have you ever been burnt by a book? Been trapped between its pages, gasping for air? Have you felt that if you read any more you'd die; but if you didn't read, you'd die anyway? If you've not had the pleasure of such a pain, read Dozakhnama.

Page after page of this book, I've been burned. Page after page, I've suffered as a reader. Page after page, I've yo-yoed from heaven to hell and back. I've seen creations divine, and endured the labour pains that every creation demands. Author Rabishankar Bal takes you through the agonising journey of two creators of beauty and if you are a writer/poet yourself, the book feels like a kick in the gut. And yet I held on, read it as slowly as I could, wishing this sweet pain would never end.

Dozakhnama is originally a Bengali novel by acclaimed author, Rabishankar Bal and it has been translated into English by Arunava Sinha. Between its pages lie Saadat Hasan Manto and Mirza Ghalib conversing with each other from their graves. The sutradhar is an author who has stumbled upon an unpublished work of Manto's and has set out to translate it. In this mysterious manuscript is recorded this fantastical conversation between modern Urdu writer, Manto and one of the greatest poets in Indian history, Ghalib.

Speaking across nearly a century, Manto and Ghalib share the stories of their lives with ghosts for company in the night. Manto and Ghalib take turns in every alternate chapter to share a piece of their lives and soon the line between historical facts and fiction is blurred. Bal owns their voices with such confidence that one is loathe to believe that the words are not really Manto's or Ghalib's. Sprinkled with little dastaans and poetry by greats like Mir and Rumi and of course, Ghalib, the book charts not just the life of these two artists, but also the literary ethos of India from the 19th through the 20th centuries.

Though far removed from each other in time, Ghalib's and Manto's journeys seem similar. But then, all artists have journeys like these - travelling through their personal dozakhs, their private hells while creating honest art. Ghalib and Manto both had their share of love, poverty, victory, heartbreak, alcoholism, and persecution for their truth, their words. Ghalib's India at the end of Mughal rule, and Manto's India at the end of British rule are very different, yet the trials of an artist's life are the same, the cycle of pain and creation neverending. Bal chronicles their lives and poetry and pain in one seamless breath, creating this masterpiece of a book. A thought must also be spared for Arunava Sinha and how he too must have partaken of this fire when translating this book. It's brilliant and I believe none of the effulgence of the original work was lost in translation.

Do yourself a favour. Read this book.

I've never before seen so many vacant eyes in one place,
so many people united in purposelessness.
Like a city of ghosts - full, yet empty as empty can be;
like a city of ghosts - frightening.
A pitiable attempt by lonely city souls
to drown themselves in noise
popping aspirins of mindlessness,
hoping for salvation in alcohol-fueled amnesia.
Glassy eyes, meaningless words, hollow laughter
clutching on to their phones like they would a feet of a messiah
begging for a portal to escape this prison of shallow.
Music, smoke, the spirits and strobe lights,
an army of gyrating zombies in a full/vacuous room.
I drank when they drank, danced when they danced,
smoked when they smoked, dressed like they dressed...
I fell in line; a doll on a carousel of a toy factory; no will of her own.
But before the night wore out and I could be claimed by this city of shadows,
My voice found itself and I ran, screaming "NO NO NO NO"
I will not be sucked into this trance, I will not dance this terrible dance,
I will not be amused by this adult rattle. 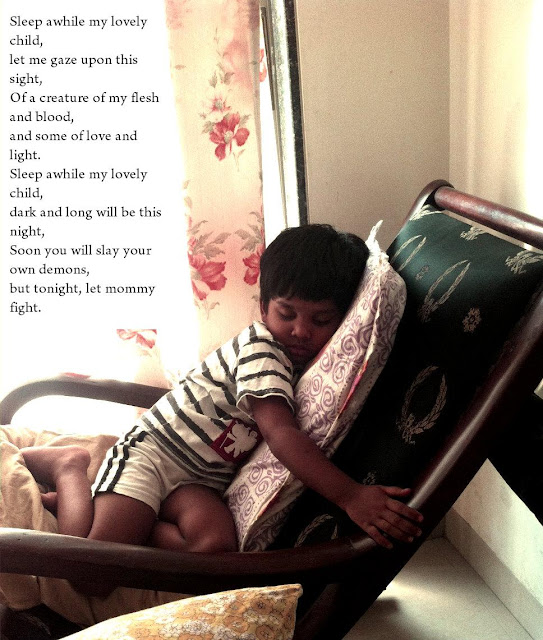 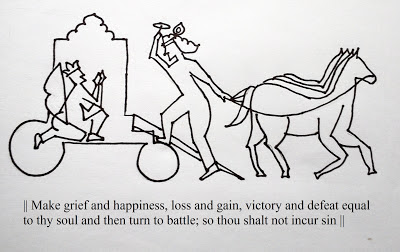 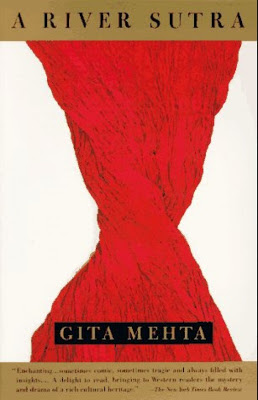 The good/bad invention/addiction that is Twitter is perhaps the single most influential sphere of my adult life. I've made and parted with friends here, built some real and imaginary relationships, had some genuine camaraderie and also some unnecessary fights; I've generally allowed it to dictate big chunks of my emotional life. For me, Twitter is as real as virtual life can get. Of the most dear people I've met here is @scrollsnink or Reema. I've never met her in real life, but I can claim to love her as I would a sister. It is she who gifted me 'A River Sutra' by Gita Mehta, and I owe her big time for this one.

When Reema sent me this book, I was unimpressed with the aesthetics of the cover. It seemed mystifying, but not enough for me to pick it up immediately. After months, when all my 'review' books were finally done with, I sat down with 'A River Sutra', and it wouldn't be exaggeration to say that I drowned immediately. I realised within a few pages what The Illustrated Weekly of India meant when it said 'A River Sutra is a seminal book' (as quoted on the cover).

Page after page I wondered why the Amishs and Chetan Bhagats of the world have gotten popular and why a book like 'A River Sutra' hasn't enjoyed its share of accolades. The book is a collection of stories - the monk's, the teacher's, the executive's, the courtesan's, the musician's, and the minstrel's - interlinked by the retired government official's, who acts as the sutradhar. The stories are all based along the banks of the Narmada, bringing alive its many myths and legends, coloured through the lenses of human emotion and experience. Each story is poignant, absorbing and with a magical quality to it. They are all tales of human transformation from the physical to the metaphysical, just like deliverance through the sacredness of the river Narmada.

Mehta's genius shines through in every story - both as a short story writer and a novelist. The vivid, human and completely believable protagonist of every story illustrates the writer's masterful character sketching, and one is led on consecutive rapid journeys. Whether it is the executive's bored life in the city followed by a mysterious encounter with a tribal woman, or the courtesan's tryst with a notorious bandit, each tale not
just involves the reader, but inundates him, washes him away like the swollen waters of the Narmada. Mehta writes lyrical prose and often quotes the most beautiful couplets from famous works, ranging from Rumi to Shankaracharya. She writes with the kind of simplicity only possible for geniuses, yet never compromising on her artistry. The musician's story, in particular, pierced my heart with an intensity I've not encountered in literature often. Her knowledge of the Narmada myths, Indian culture and music come through without her ever sounding pedantic.

Gita Mehta has easily become one of my favourite Indian English authors, and I can place her among the ranks of Anita Desai. I would recommend this book to anyone interested in contemporary Indian fiction in all its beauty.