The Hindus - An Alternative History by Wendy Doniger: Impressions 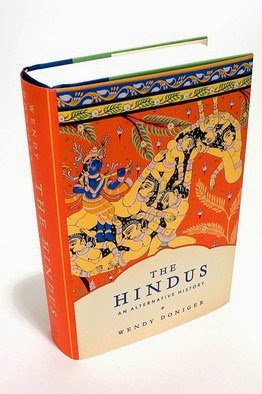 In the age of short attention spans, finishing 700 page strong book feels like a victory of sorts. More so when the book is not a racy thriller. I’ve just finished Wendy Doniger’s (in)famous ‘The Hindus: An Alternative History’ after three, maybe four months, punctuating it with life. However, Wendy Doniger can’t be accused of NOT being racy - in both senses of the word. She may be writing history, but her ideas and her presentation are certainly page-turners. It’s just the small print and the mammoth scope of this book that make you want to stop and ruminate ever so often.

For the few who may not know, ‘The Hindus: An Alternative History’ recently became Doniger’s most talked-about book because an organisation called SBAS (Shiksha Bachao Andolan Samiti) objected to it. It’s founder, Dinanath Batra, dragged the book to court on account of controversial content that would hurt Hindu sentiments (yawn) and asked for it to be banned in India. Penguin and Aleph upheld these bans and withdrew all existing copies. And true to human nature, we all made a beeline for it just because they said NO. Thanks to the Internet, imported editions of the book can very much be bought online and e-books are readily available.

I gleefully dived headfirst into the book with starry eyes, a fan as I am of Doniger’s work like every aspiring Indologist. The book is divided into 25 chapters, each chronicling a definitive period in Indian history beginning from the prehistoric (50 million BCE) right down to the present. Doniger starts out with the man/rabbit in the moon metaphor, knowing well that nothing about Hinduism is what it seems. But it is plain to see throughout the book that her scholarship is tremendous; Wendy Doniger doesn’t miss a trick. However, what is most admirable is her erudition laced with wit. I don’t think I’ll ever forget her use of “maithuna you” and many such Doniger tropes.

Doniger is a humourous writer - sometimes to the point of irreverence - and this is probably what didn’t go down well with the Dinanath Batras of the world. Frankly, I don’t see anything in the book that may be called truly objectionable/ controversial, but here is a list of statements that were deemed so. Critics have panned it for inaccuracy, but I think they’re missing out of the idea that this is meant to be an ‘alternative history’. While most of Doniger’s claims are backed with scriptural/literary evidence, a lot of the book is also about her unique perspective. She writes Hindu history from the point of view of the suppressed lower classes and women. She tries to represent their anonymous voices, especially in all non-Aryan literature, that shaped the more recent body of scriptures (like the Puranas) and consequently the society. She makes these subdued voices loud and clear, without becoming cloyingly feminist or activist. She remains an objective scholar throughout the book, much to the chagrin of purists.

But the book is not without its weak spots and one thing I found annoying was the author’s preoccupation with animal motifs. Doniger obsessively harps upon horses and dogs, what these animals represent, the matter of sacrifice, vegetarianism and so forth. These are important and legitimate points but excessive all the same. That said, Doniger knows her India and its history better than most of us born here. Banned or not, ‘The Hindus: An Alternative History’ deserves to be read for eye-opening insights about this country, taken of course, with the tiniest pinch of salt.