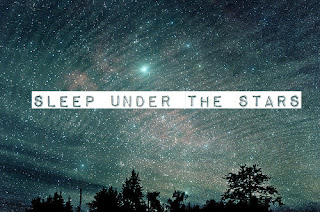 A note on Nature as a canvas for mystical experiences

Nature and its infinite beauty is a source of constant wonder and inspiration. It would take a heart of stone to not be moved by her many graces. Some take solace in a sunset, some are roused by the rising and falling waves, some are moved by the mountains, yet others find comfort in the company of creatures. My muse is often the moonless night sky.

My earliest memory of beautiful starlit skies is from my childhood. Summer nights in a small town in Maharashtra in the 80s and 90s were extremely hot and often with long 'load sheddings'. I remember my mother judiciously sweeping and washing the huge terrace of the two-storeyed building we lived in, in the evenings. When night fell, we would drag our mattresses, bedsheets, mosquito coils and bottles of water to the roof top. It was something of an adventure, a happy annual ritual I looked forward to. I may not remember the conversations, but my 8-year-old self has never forgotten the sight of those starry skies as she lay on the moon-cooled bedsheets on hot summer nights.

We moved house, the MSEB got better at its job, the city smoke clouded the skies and the ritual was forgotten. Years later, when I travelled to the north of India, I was struck by the stars again. We were walking back to our hotel from a temple in Rishikesh; it must have been 8pm. My parents had stopped to talk to some people in the lobby, and I lingered on outside for some time...

Leaning on a car, I looked up and there they were. Those dazzling diamonds spread carelessly on the velveteen sky. I remember how striking I found the inky blackness of the sky, how countless and bright the stars seemed. The smog-laden city horizons had made me forget what lay beyond that dirty veil. I sucked in a lungful of that cold, crisp, clean mountain air as I took in that sight. It was a moment of realising the sheer largesse of the Creator and utter gratefulness for letting me partake of the marvel that is the Universe. It was a moment of perfect unity, clarity and beauty.
I still look up when I feel lost, or whip out those stars from many moons ago.

"For my part I know nothing with any certainty, but the sight of the stars makes me dream." ~ Vincent Van Gogh