The Journey After Life by Cyndi Dale: Impressions 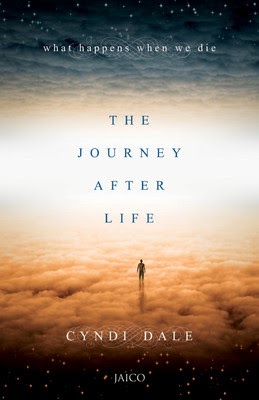 For as long as I can remember, I've been incredibly drawn to that realm beyond 'reality'. What begins after science ends? What are the things our senses cannot perceive? Where does one draw the line between matter and spirit? If you look at my book shelf, you'll see at least a dozen titles on energy 'sciences', religion, mythology, philosophy, and allied subjects. I read endlessly about what lies 'beyond', but do I believe what I read? I can't tell. I don't know. Years of formal Western style education, combined with a deep interest in Eastern esoteric-­ism, have turned me into this half­-baked creature. A skeptical believer, a believing skeptic. I want to believe but I find myself compelled to question. A fine example of my personal paradox is that I have now simultaneously become a student of both – evidence-­led history and archaeology, and intuition-led mysticism and mythology.

However, in my quest for answers, I lap up books like 'The Journey After Life' when they come my way. 'The Journey After Life' is written by Cyndi Dale, an American healer, speaker and author. She has written several books on Chakras and other energy paradigms, has intuitively healed hundreds of people and continues to do such work, thanks to her psychic abilities. In this book she deals with the subjects of death, the soul, and afterlife. She also talks extensively about spirit beings, angels, dark souls, faeries and so on, and their role in our lives. She elaborates upon the nature of the soul, drawing from religious sources as well as quantum physics! Dale's book not only shows the extent of her 'research', but also her intuitive understanding of human nature and compassion. It was the latter that quite affected me as I was reading this book.

Just a few pages into the book, and I felt connected with her. I felt her spiritual presence in the room, as I sat holding the book, like I would hold her hand. Ever so often, I would find myself crying as I read her kind words. I was reminded of my spiritual mentor, Shilpa Inamdar – also an energy practitioner and healer – in whose kind presence I always felt so purged and refreshed. In her wonderful manner of communicating, Dale introduces the concept of death as a part of life in the introductory chapters, which form the first part of the book. She says how all life is light, as everything emanates from the great White Light. I found this idea very similar to the Hindu idea of Brahman, from which all creation and life emanates and into which everything culminates.

However, Dale's idea of the great source of light is not all that simple, as she speaks about several Planes of Light through which a spirit travels before it reaches 'Ultimate Consciousness'. The second part of the book describes these planes in great details, with a chapter dedicated to each of the 13 planes of light. She associates every plane with a chakra, explains what it means, what a soul's purpose on that plane is, who the guiding beings on that plane are, how to 'visit' and benefit from that plane even when one is alive and what their corresponding metals, colours and mediation techniques are. It is greatly practical book from this perspective, but the key is belief.

Despite my initial 'connection' with the book, there were times when there was a complete lapse of faith and what I read appeared to me as gibberish, or fantasy at best. I might as well have been reading a book on nuclear physics, because I had no clue what was going on. Because with my limited knowledge and ordinary perceptions, there is no way of ever corroborating the contents of this book, and I was always teetering on the edge of (dis)belief. Spirits, guardian angels, tunnels of white light, NDEs, curses, ghosts and other such ideas are hard to stomach but there are great takeaways from this book in terms of love, humanity, kindness and compassion. Choose what you will.