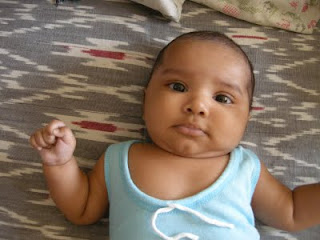 Jishnu is definitely not going to appreciate this blog post if he ever lays his eyes on this when he grows up. After all, constipation is not something you document; even if it’s your baby’s first.

It has been some days since our collective anxieties have passed along with baby’s motions (November 22, 2009, to be precise). Like all things first, his first two potty-less days had me worried. Although every article that Google spat out assured me that it was perfectly normal for babies to go without making poo-poo for 3-4 days, I worried. The internet offered solutions like prune juice and apple juice and I even called the doctor. He said the same things as that God named Google did, but I still worried. Then I waited. Next morning he graced us all with some substantial quantities of stinky poo. Yay!

Since then I’ve been planning this post. Actually, what stuck in my head was the title of the post and I was mighty pleased with the pun. So here it is.

Baby is 10 weeks old now and the worst of the vaccine episode is behind us. The last two days were quite the nightmare I expected them to be with fever, pain, sleep, burping and feeding issues. Baby cried and cried and then some. I cried too. Bringing up a baby, one day at a time, is no mean task. All those who tell couple to have babies must be lined up in front of a firing squad and bang! Another villain of that triple vaccine to go next month and we’re good for the next three months.

Breastfeeding is no fun. No statue of Angelina Jolie feeding both her twins simultaneously, Hollywood stars bragging about their ‘boobworthy’ stints and hundreds of internet forums proclaiming that ‘breast is the best of your baby’ is going to convince me of its merits. No sir. The truth is that it makes you feel like a cow, makes your boobs sag and doesn’t allow you to leave the house for more than 3 hours at a time. It also leads you to believe that whoever thought of the brand name Mother Dairy was a breastfeeding woman. And let us not even discuss leaking and peeking when it needs to be done in public. Ugh.
(I say a little prayer here… “Baby, take to the bottle soon”.)

And just when I thought my life going to get back in track, a few bombs fell out of the sky. Viren announced that he has been asked to move base to Mumbai. That essentially meant we shift, I quit, we live with my in-laws, I look for new work and travel in buses and local trains for an eternity to get to a job that I hope to find there. Meanwhile, feeling obliged to my in-laws for taking care of the baby becomes an essential part of the package.