The Zahir by Paulo Coelho: Impressions 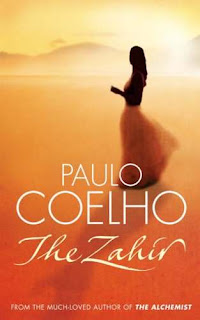 So, I read a Paulo Coelho book. Are you scoffing already? Good. It won't be wasted, because I won't be reading him again. I told myself the same thing the last time I read one, but when your next chair colleague raves incessantly about a book for 6 odd months, you want to read it, even if to shut him up. So I did. And I reached the same conclusion again. I don't like Coelho. Too preachy.

But The Zahir had its moments. The book deals with the concept of an all-pervading idea, that fills up your entire existence, and won't let you rest till you come to terms with it. And how the author goes on a literal and metaphorical journey to come to terms with his Zahir.

Since I've never had a Zahir, I did not agree with the central idea of the book. But then, I've never had any of those mystical experiences these mystical books talk about. However, I like Coelho's simple idea of unburdening oneself of one's past (self-forgiveness?) before one can begin to 'live' again. It is by no means an original idea, for how many times have you been asked to 'move on'? Coelho talks about moving on too, but not necessarily away from a person or a problem. He talks about embracing the 'problem' or the Zahir, to walk toward it, to accept it wholly, to be truly rid of it. I also like how he fights the notion of sacrificing for others and seeking one's happiness, as much as it is a taboo (I've always believed you cannot make anyone happy, if you aren't happy). There are also little revelations about the lesser known cultures and traditions of Kazakhstan, the lives of celebrity writers and the usual gyaan about human nature.

The book may be a good read for Coelho fans, but don't read it just because someone did, like I did. I'm going to keep only one piece of advice from The Zahir. Answers about oneself are not to be found from mystical sources. One needs only to keep his being open. 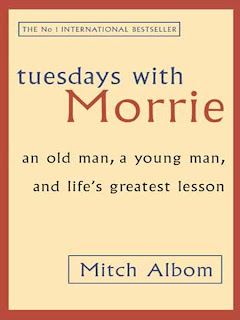 You've read this book, right? Yeah, anyone who reads at all seems to have. It's one of those insanely popular life hack kind of books, with selling points as all manner of gurus have. And with so many people existentially lost, any manner of direction-giving does good business. Everyone likes these; which is why I don't; which is why I had desisted from it so long. But I finally did read it, perhaps because it was the thinnest book on my shelf, and I was feeling lazy, or perhaps because I am getting old for pointless derision. I gave curiosity a chance.*

So this super-acclaimed book, which has been turned into a movie, a play and is studied as a coursebook in several universities, what does it have? Honestly, nothing you and I do not know. It has pretty much the standard how to be a good guy and live a real life and find true happiness in love, giving, etc... You know, lessons we learnt in Moral Science in school, lessons that line whole sections of book stores labelled Self-Help (I can never stop scoffing at that term). So what is in it again, I ask?

I'll tell you what. The little philosophies on life and love are the just the frosting. The cake people buy this book for, is the story of a death. Death, that is not theirs. Death in its slow, glorious, torturous form. It's a little black circus people watch here - that of the death of a frail old man, on whose being the claws of death are slowly talking grip. The page turner is not the next 'nice' Tuesday lesson by Morrie, but the increasing degree of his helplessness. Albom is a good writer. He captures what he sees well - a man on his deathbed. Morrie's little pep talk, however, remains just that (OR FORGET EVERYTHING I JUST SAID BECAUSE I AM PROBABLY ONE HUGE CYNIC AND HATE THESE PREACHY BOOKS).

But the book has some nice lines people can write in their diaries or tweet about (and then conveniently forget). There's this thing about not buying into a popular culture, because it is all a piece of marketing bullshit (which I really and truly believe). Then there's this thing about family being the only real anchor, because friends are kind of floaty. Also, that jazz about material things not giving anyone real happiness, and forgiving oneself being important is nice. But hey, tell me something new, okay? Don't try to sell me a book for a few sympathy votes.

*I is disappointed, because the cat got killed.
Posted by Urmi Chanda Vaz at 3:04 PM 1 comments 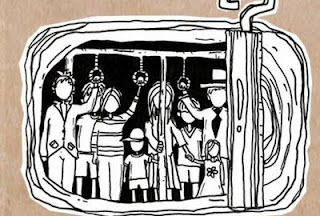 You heard that right. But because my limbs are still aching, from being mangled by people of all shapes and sizes, I'll say it again: Hello, I am a sardine. And by sardine, I mean Mumbaikar. And by Mumbaikar, I mean I have to ask my need for personal space to "Fuck off!" I am learning to say it louder every day.

Yes. I am finally part of this grind. With having to travel to work in buses, I am now one of this giant mass of living, breathing, moving creatures, who operate in such inhumanly small spaces, that even asking for 2 feet of dignity is asking for too much. On every bus ride to and from work, I brush inadvertently against people's bodies and sometimes their minds. I peer and get peered at. I push and get pushed. I curse and get cursed. It all evens out, in this ginormous sardine tin brotherhood. Every bus is full, every train is packed, every road is jammed. But people seem to go on. In their little bubbles, created with newspapers, music, phones, ambition and desperation, they go on. A polite smile exchanged, a seat offered, a seat snatched, a foot stomped, a frustration (of a bus behind schedule) shared. Little rituals exchanged everyday, with scores of unknown faces, in this mad, endless dance called life, in a bid to survive. 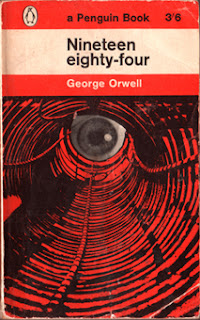 George Orwell's '1984' was one of the many books recommended to me by a person I look up to, about seven years ago. Since then, I've been ticking off many a book on that special reading list, but '1984' was relegated to the rear end of the shelf, its pages turning from crisp white to sweet-smelling yellow. Each time I tried to read it, I'd be so bored by the third page, that the book would be pushed out of sight, and purposely forgotten for another spell. Perhaps I was too young, and perhaps too impatient with anything that had big sounding political words in it.
But when I took my Nagpur vacation in June 2011, waiting between jobs, I decided to make my time worth its while, and do some serious reading. And as I stood before my bookshelf, '1984' promptly jumped out at me. I decided it was time to finish off the last book of that reading list, and picked it up. I think it picked me too. And now that I've finished it after 15 long parenting days, I've decided I've grown up.
'1984' is one of those books that claim you and keep you in their stranglehold, till you've finished with the last word on the last page. When the first few pages sucked me deep into its scary, grey world, I rejoiced at the breaking of the literary jinx (I'd been chancing upon bad books for a while), having finally found a book worth its salt. But I knew not that the book would possess me to such an extent that every time I slept, day or night, I would find myself locked in a nightmare called '1984'.
There was no escaping the dark totalitarian society, ruled by the all-powerful Ingsoc, and the omnipresent Big Brother. Orwell's powerful writing seemed to have fitted one of those ominous telescreens inside my head, which transmitted constantly the idea of a miserable existence in a oligarchical society, into my subconscious. Many of my waking moments were spent wondering how much do our governments really control and how much do common people like me, living under the illusion of democracy, really know. What if, as Orwell envisions the 1984 Oceanic society, even my ideas of freedom were governed by a thought-controlled society? Satire though it is, '1984' poses such vividly frightening questions of existence, that one is compelled to wear grey goggles of suspicion and view the world one lives in.
Concepts such as the Thought Police, Newspeak, the paradoxically named Ministries of Truth, Love, Peace and Plenty, the Anti-Sex League, Doublethink, and a history-altering totalitarian state are nightmare inducing stuff. I've risen from my slumber so many times in the last 15 days, watching my back and my tongue. Orwell's Thought Police may well have stepped out of the pages, arrested me, tortured me and 'vapourised' me for thinking the 'wrong' thoughts, dreaming the 'wrong' dreams.
So compelling are Orwell's words, that you are never once allowed pity for the protagonist. The party, and only the party, grips your imagination and your feelings. You stand aside and watch like a helpless Outer Party member, and are at the control and mercy of Ingsoc. You can only wince and wish you could look away, as the Party inflicts its atrocities, but you cannot as morbid curiosities take hold of you. You are a prisoner in the unjust world of Orwell's '1984', where

WAR IS PEACE
FREEDOM IS SLAVERY
and
IGNORANCE IS STRENGTH.

PS: If you haven't read this book, DO.

Posted by Urmi Chanda Vaz at 7:56 AM 3 comments