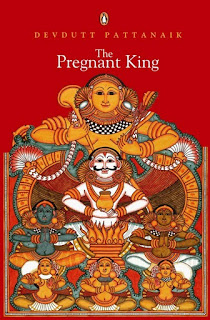 He wept for his father, the pregnant king, for the imperfection of the human condition, and our stubborn refusal to make room for all those in between.


This last line of the book, The Pregnant King by Devdutt Pattanaik, succinctly sums up its message. And what a powerful message! The book is less about the 'aberrations in nature' and more about society disowning them. Whether in Dwapara Yuga or the Kali, human beings have remained the same in their non-acceptance of the non-normal. Through the story of many major and minor (as we call it these days) LGBT mythological characters, Pattanaik reminds us of the humanity we often forget to show to humans who are a little different. In his first work of fiction, he writes with the same signature elegance, that make all his books so readable. His merit is in presenting the universal aspects of ancient stories that make them relevant to the modern reader.

Pattanaik mentions right in the beginning of the book how he has neither adhered to chronology nor to geographical boundaries. He has pulled out many popular characters from across mythology, uniting them in this work of fiction to demonstrate the agony of persons whose minds and bodies are divided on the aspect of sexuality. So apart from the story of Yuvanashva - man and mother, there are stories about Shikhandi - woman and prince of Panchal, Ila - man and wife, Somvat- boy and wife, and even Arjuna - warrior and eunuch among others. Not just human characters, the author tells us stories of gods and demons also plagued by mixed sexualities. There is, for instance, Sthunakarna - a yaksha and yakshini and Ileshwara - god and goddess.When he needed to introduce similar queer characters into the story, who could not in any way be connected to the plot, the author made clever use of bards, who tell stories about them.

Coming back to the prime character of Yuvanashva, Pattanaik etches a well-defined character of the king who became a mother. Unable to bear a child for many years, the king seeks desperate measures. A magical potion churned by two Sidhhas promise him children, but not quite in the way he imagines. Instead of his wives, the king accidentally drinks it and begets a child. Though the truth of the child is kept a secret from the subjects and even the child himself, it manifests itself in the king's maternal feelings. Then comes a moment of truth, which threatens to destroy all order. When the truth is rejected, as it is done to this day, Yuvanashva leaves the world in search of a truth that transcends all human definitions.

The book tackles the questions of gender roles and discrimination very well. It explores the many relationships that define our lives. Parent-child, husband-wife, friendship, veneration and rejection. It draws richly from the many lessons in our ancient scriptures and presents a posy of wisdom. Though the plot was a little slow to start up, once it did there was no going back. Read it because it will impregnate you will some very worthy thoughts.
Posted by Urmi Chanda Vaz at 3:32 PM

wow thats a great review UCV. This is a must read :) Followed you here from ALOP :D I love your blog,am following you!

Thanks a ton, Swarnali. Glad you like this place. There's pretty much all there is to me in here. XX