There was no one at the Bus Stop by Sirshendu Mukhopadhyay: Impressions 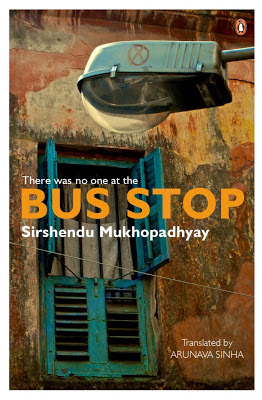 Thanks to prolific translator, Arunava Sinha, I am learning to be a Bengali all over again. Sinha has translated a number of books by some of the most famous names in contemporary Bengali literature. Thanks to him, 'probashi' (expat) Bengalis like me are getting to savour the wonderful literature Bengal has had to offer in the last few decades. I grew up hearing my mother wax eloquent about writers like Sirshendu Mukhopadhyay, Sunil Ganguly, Bani Basu, Sankar and others and they were always a world away... until now. Sinha's long list of translations include wildly popular novels, short stories, young adult fiction, and children's stories so far.  I also hear he's also translating some poetry. He has opened many wonderful doors to my mother tongue, one of which is this novella 'There was no one at the Bus Stop' by Sirshendu Mukhopadhyay.

In the middle of a fact-heavy sociological book that I'm dragging my feet, I needed to read something light. So I picked up the slimmest volume from my to-be-read pile of books on my flight to Goa. I didn't realise just how much weight the pages of a book can bear. Although I finished the book in less than two hours, 'Bus Stop' was anything but light.

Set in Kolkata the 70s, 'Bus Stop' is a simple enough story of an extra marital affair. However, it is the sea of emotions that the protagonists experience that drowns you with them. Debashish, a impudent man in his middle age is in love with Trina, a woman he knew as a girl. Freshly widowed, Debashish feels little or nothing about his late wife, but his young son, Robi has many of his heartstrings. Trina is ageing gracefully, with two adolescent children and a husband who cares more about his garden than his wife. A chance meeting brings them together and sows the seeds of desire in Debashish's heart. A melancholy Trina, squarely ignored by her family, gets drawn to him too.

The plot unfolds in a single day marked by two momentous decisions taken by the protagonists. Debashish is compelled to leave his son with his sister for a 'better' upbringing, while Trina, spurned by her family, leaves her home and goes to Debashish, hoping to reach some conclusion about her life. However, they are unable to savour their togetherness plagued by guilt and wrongdoing. It's a love that never will be.

It is in portraying these evocative feelings that Sirshendu Mukhopadhyay's genius lies. The author's language is shorn of frills, yet amazingly lyrical in places. There are clever suggestions and plenty to read between the lines. There is none of the melodrama to express overwhelming emotions, nor explicitness to express intimacy that we see so much of in today's 'literature'. Understated, yet hard-hitting are adjectives that best describe the author's style. All I can say is that I flew through the book with lumps in my throat. Read it for Bangla literature. Read it for an insight on the beautiful and complex nature of human relationships.