The Devotion of Suspect X by Keigo Higashino: Impressions 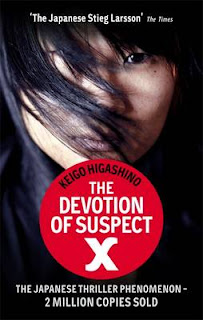 I stopped reading thrillers some years ago, mostly because I don't walk away with anything after the story has ended. Perhaps I've not chanced upon good thrillers, perhaps all thrillers are the way I think they are. The joy of style apart, very few thrillers leave you with bits of themselves after you've put the book down. But when I happened to spot The Devotion of Suspect X by Keigo Higashino on Blogadda as part of their book review program, I decided to pick it up for three reasons: one, they were giving away 100 copies; two, I was curious about non-Murakami Japanese literature; and three, 'I haven't read anything light in a while, and this thing has sold 2 million copies, so why not?' So I read it and as usual, I'm empty-handed at the end of it.

The Devotion of Suspect X is not a bad book. The language is crisp, the plot racy. I enjoyed it while it lasted, like one would enjoy drunken sex perhaps. But if you asked me what the author's name was after three days, I wouldn't remember it (if you know what I mean). Higashino is a good writer as mystery/thriller/crime writers go. If The Times review is to be believed, he is even like Stieg Larsson (not that I knew who Larsson was before I Googled him). His characters are well-sketched, his plot well-defined, and his ending, twisty.

But how the story concluded I have a problem with. 'Contrived' is the word I'd use to describe it. I also have a problem with the title of the book. The devotion part I can understand, but who the heck is suspect X? I know who it refers to after having read the book, but why the author chose to call the person Suspect X on the cover when there's not even half a mention in the whole book is beyond me. Another thing that I didn’t appreciate about this book, like many other books written in this manner, is that there is no whodunit. The reader is made privy to the murder and the murderer right in the beginning, and all through the plot, one can’t help but feel that the wild goose chase is for nothing. However, it is the twist in the tale that Higashino wins all his points for. Because I cannot say anything about the twist without betraying the plot, I won’t.

The plot revolves around three principal characters – the beautiful, middle-aged Yasuko, her neighbour, Ishigami, the quiet genius of a Maths teacher and Yukawa, a physicist doubling up as a sleuth. Yasuko’s vulnerability as a single mother, Ishigami’s unruffled surface, and Yukawa’s cunning are all brought out beautifully. The author captures well the chemistry between these characters, and well as the other secondary ones. He keeps the interactions real and the setting vivid, enabling the reader to visualize the story as it flows. Even though I am not a fan of this genre, I can easily say that for those who love thrillers, The Devotion of Suspect X is definitely worth a read.

Sign up for the Book Review Program for Indian Bloggers. and get free books! Participate now!
Posted by Urmi Chanda Vaz at 7:12 PM

The Devotion of Suspect X!!!!

Awesomely crafted book!!! The brains of the Ishigami and Yukawa brilliantly written by the Author!!!! You will not even get hint of the plot. As it is told in the book, you will go by the problem as it is shown to you and not in the way you wanted to solve it.

A very good book to read if you are Stieg larrson Fan.... Although not as good as stieg larrson but yeah worth reading it!!!!

I'm not disappointed with the climax, but with the character of the book!!!!