Servants of the Goddess by Catherine Rubin Kermorgant: Impressions 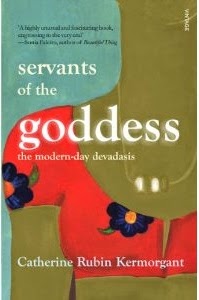 If I had to pick one work of non-fiction from among the many I've read over the years, 'Servants of the Goddess: the Modern-day Devadasis' would be an easy choice. Author Catherine Rubin Kermorgant has a gift of style that can trump many novelists. She holds the reader's attention from the word go, and who can turn away from a title like 'Servants of the Goddess'? Especially people like me, who take an avid interest in Humanities. When the book came up for a review, the blurb promised me insights on social structures, caste systems, religion, mythology, and tradition surrounding the Devadasi system. And then there was some amount of shock that made me pick it up.

That the Devadasi system should still exist in a big enough way for books to be written about it, shocked me. Living in a metropolis, enjoying the freedom and privileges of education and financial freedom, it is easy to push the knowledge of the oppressed into the recesses of one's consciousness. We don't like to acknowledge our failings as a society, as a government, as human beings. Often, we need an outsider's perspective to wake up to our home truths; and that is exactly what 'Servants of the Goddess' does. The book not only reveals important social issues, but also the author's beautiful spirit.

Kermorgant is an author, researcher and documentary film-maker based in Paris, and she has worked on several projects highlighting social issues in India. She comes to Kalyana in Karnataka in 2002, hoping to make a documentary on the Devadasis of the region, for BBC. Kermorgant recounts her journey in this book, the trials she faced, the prejudices she learnt about, and the friendships she forged. With an astute interpreter, Vani, by her side, Kermorgant penetrates the cloistered society of lower caste devadasis and gains their trust. She understands the religious, economic and social motivations and implications of the devadasi system, often shocked and saddened by the vicious cycle that sustains it.

A few months later, she returns with a film crew and after numerous hitches manages to capture on film the custom of dedicating young girls to the Goddess Yellamma, the implicit sexual slavery, the eventual prostitution and the pitiful social position of these women locked into the system. Kermorgant learns how devadasis choose not to break away from this tradition owing to deep-rooted superstitions/ religious beliefs in the powers of the Goddess. But underneath it all, she is inspired by the dignity and resilience of these women. However, the tables turn during the editing phase, when her co-director distorts the film, failing to highlight the social and economic plight of these women. Angry, Kermorgant, sues the production company, and the film still hangs in a limbo.

Kermorgant takes recourse in this book, telling her side of the story. She gives us a powerful narrative, often exposing the prejudices we live with and perhaps even unconsciously condone. She rightfully points fingers at our lackadaisical system of reforms and unwillingness to bridge the caste gaps. The book is, however, not entirely free of the 'White Man's complex', where (s)he wants to 'civilize us barbarians'. But for the most part, it is deeply insightful and empathetic to the Indian way.  Also apparent is the author's erudition and extent of research. She starts the chapters beautifully with relevant verses from several Indian religious scriptures and ends them thought-provokingly.

It's a beautiful, informative book, really. Read it.