Yuganta - The end of an epoch by Iravati Karve: Impressions 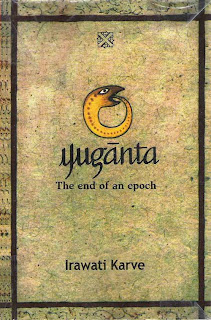 Commenting on this book would be a minor crime, for there are perhaps few equals to Iravati Karve’s Yuganta – The end of an epoch. Commentaries and commentaries have been written about the ‘Mahabharat’, and continue to be written today, such is the mystery and vastness of that epic. But few have dared autopsied it with the scientific precision of Karve. Little wonder that it won the Sahitya Akademi prize for the best Marathi book of the year in 1967. It was later translated and published in English.

An anthropologist, Karve dissects all characters with an objectivity impossible for most native readers. She begins with a neat introduction explaining the literary tradition of the ‘Mahabharat’. She writes about how the original work was called ‘Jaya’ (victory), and composed/carried forth in the oral tradition by the members of the Suta caste. This sauta (of the Sutas) literature is then passed on to different sections of the society (especially Brahmins), who make additions and interpolations, thus enlarging the original story. What we consequently inherit is the ‘Mahabharat’ (great story of the house of King Bharat).

In the subsequent essays, Karve picks each of the major characters of the ‘Mahabharat’, giving an incisive character analysis. The first of the lot is the character of Bhisma. Karve wonders aloud about the contrary motives of some of Bhisma’s actions, who while appearing to sacrifice all for the sake of others, takes some rather peculiar decisions that seem directed at proving his personal greatness.

The two great matriarchs are then dealt with in the next two chapters, which elucidate mainly the injustices suffered by Gandhari and Kunti. Yet, Karve goes on to show the strength of the two Kshatriya women, and what part they played in binding the Kuru clan together. Gandhari’s great sacrifice though laced with bitterness, and Kunti’s pain and guilt on parting with her firstborn, Karna, are some of the instances described in these two chapters.

An interesting chapter called ‘Father and son?’ explores the important character of Vidura, and the possibility of him being Yudhishtir’s (or Dharma as he is referred to in this book) father. Karve points to us the several similarities in character between the two, in addition to the custom of the time when the younger brother was allowed to sleep with his brother’s wife, if the brother was unable to beget children. Vidura’s fondness for Yudhishtir and his firm loyalty to Kunti, apart from an ambiguous passage towards the end of the epic proclaiming that Vidura and Yudhishtir are but one for they both are the reincarnations of Lord Yama, are served as evidence by the author.

There is yet another interesting chapter on Draupadi, and Karve compares and contrasts the character with that of Sita - the female protagonist of ‘Ramayana’. Karve points out the emotional richness and scope of Draupadi’s character as compared to Sita’s formulaic one. She also talks about her unique relationship with her five husbands, her ultimate insult at the Kaurava court and her thirst for revenge that, in part, pushes the Pandavas to war. Several more aspects are noted in this chapter.

Karna’s character too is analysed in detail. Instead of the pitiable hero that Karna is made out to be in the popular renditions of the Mahabharat, Karve paints a not-so-rosy picture of him. Despite the occasional show of the strength of his character, Karna, according to Karve, is a flawed man because of his deep bitterness and rashness.

is also studied from a very human perspective in Karve’s book. is not a god, whilst in the ‘Mahabharat’, but a very powerful, charismatic and clever man. He is shown by Karve to be more of a friend of Arjuna and a well-wisher of the Pandavas, rather than a divine being. She explains how subsequent literature, like the ‘Bhagvata’ accorded divinity to , unlike the Mahabharat. His role in the war, and the rise and fall of the Pandavas and the Yadavas is also spoken about in this chapter.

Of the two remaining chapters, one is a study of the mystical in Indraprastha, and a concluding chapter on the manners of the time. These chapters too hold a wealth of information and detailed study of some of the nitty-gritties of the epic.

Karve opens the reader’s eyes to a lot of fallacies that are wont to be in a creation by human beings. She dispels a handful of myths and interprets the seemingly illogical in a manner best understood in our times. The best part about this book is that it critiques without ever being disrespectful or dismissive. For anyone interested in the ‘Mahabharat’, and the study of Indian mythology in general, this book is a must read.
Posted by Urmi Chanda Vaz at 11:16 AM

Very nicely written. It felt like reading the again. Thank you.